LOS 32.a: Describe the capital budgeting process and distinguish among the various categories of capital projects

Question 32.3: Which of the following is least relevant in determining project cash flow for a capital investment?
A) Sunk costs.
B) Tax impacts.
C) Opportunity costs
Explanation
A is correct. Sunk costs are not to be included in investment analysis. Opportunity costs and the project's impact on taxes are relevant variables in determining project cash flow for a capital investment.
Schweser note
Sunk costs are costs that cannot be avoided, even if the project is not undertaken. Because these costs are not affected by the accept/reject decision, they should not be included in the analysis. An example of a sunk cost is a consulting fee paid to a marketing research firm to estimate demand for a new product prior to a decision on the project.

LOS 32.e: Explain the NPV profile, compare the NPV and IRR methods when evaluating independent and mutually exclusive projects, and describe the problems associated with each of the evaluation methods.


Question 32.7: Which of the following is least likely a problem associated with the internal rate of return (IRR) method of choosing investment projects?
A) Using IRR to rank mutually exclusive projects assumes reinvestment of cash flows at the IRR.
B) For independent projects, the IRR and NPV can lead to different investment decisions.
C) If the project has an unconventional cash flow pattern, the result can be multiple IRRs.
Explanation
B is correct. IRR and NPV lead to the same decision when choosing independent projects but may lead to different decisions when choosing between projects.

Question 32.8: If a project has a negative cash flow during its life or at the end of its life, the project most likely has:
A) more than one internal rate of return.
B) a negative internal rate of return.
C) multiple net present values.
Explanation
A is correct. Projects with unconventional cash flows (where the sign of the cash flow changes from minus to plus to back to minus) will have multiple internal rates of return. However, one will still be able to calculate a single net present value for the cash flow pattern.
Schweser note
If a project has cash outflows during its life or at the end of its life in addition to its initial cash outflow, the project is said to have an unconventional cash flow pattern. Projects with such cash flows may have more than one IRR (there may be more than one discount rate that will produce an NPV equal to zero).

LOS 32.g: Describe expected relations among an investment’s NPV, company value, and share price
Question 32.9: A company announces a new project that an analyst believes will require an investment of $5 per share this year and will increase aftertax cash flow by $1 per share in each of the next eight years. Assuming this project is new information and does not have any signaling effects, what should the analyst estimate as the impact of acceptance of the project on the value of the company's shares?
A) An increase of $3.
B) Either an increase or a decrease.
C) An increase of less than $3.
Explanation
B is correct. Other things equal, the new project should change the share value by the net present value (NPV) of the new project per share. Although the project has a positive internal rate of return (IRR) (total inflows are greater than the initial outlay), no information is given about the company's cost of capital. If the company's cost of capital is less than the project's IRR, the project's NPV will be positive and share value will be increased. If the cost of capital is greater than the project's IRR, the project will have a negative NPV and decrease share value.

LOS 33.a: Calculate and interpret the weighted average cost of capital (WACC) of a company. 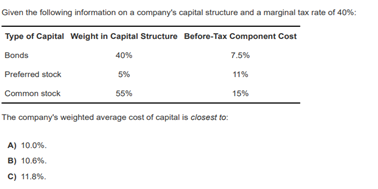 Explanation
B is correct.


LOS 33.b: Describe how taxes affect the cost of capital from different capital sources.

Question 33.2: Over the next year, Thatherton Co. is expecting their marginal tax rate to increase by 5%. Also, over the next 12 months, Thatherton plans to undertake several expansion projects significantly more risky than previous projects. Thatherton Co.'s current capital structure includes 40% debt and 60% equity. Which of the following statements correctly summarizes the effect these changes will have on the company's marginal cost of capital?
A) The increasing tax rate will increase the MCC.
B) The riskier projects will increase the MCC.
C) Both the increasing tax rate and the riskier projects will increase the MCC.
Explanation
B is correct. Recall that the marginal cost of capital (MCC) is the cost of the last dollar of new capital raised by the firm. Marginal cost increases as increasing amounts of capital are raised during a set period. In general, firms in riskier businesses, or with riskier projects, have higher costs of common equity and thus higher MCC and WACC. The increase in the tax rate would reduce the after-tax cost of debt, reducing the MCC.

LOS 33.d: Explain how the marginal cost of capital and the investment opportunity schedule are used to determine the optimal capital budget.

LOS 33.e: Explain the marginal cost of capital’s role in determining the net present value of a project.

LOS 33.i: Calculate and interpret the beta and cost of capital for a project

Question 33.9: Jay Construction Company is considering whether to accept a new bridge-building project. Jay will use the pure-play method to estimate the cost of capital for the project, using Cass Bridge Builders as a comparable company. To calculate the project beta, Jay should:
A) estimate Cass’s cost of equity capital and apply it to the project.
B) use the CAPM equation, substituting Cass’s equity beta for its own.
C) adjust Cass’s equity beta for any difference in leverage between Cass and Jay.
Explanation
C is correct. To use the pure-play method, an asset beta is calculated by removing the effects of leverage (delevering) from the comparable company's equity beta, then a project beta is estimated by adjusting the asset beta (relevering) based on the capital structure of the company that is evaluating the project.
Schweser note
Because a specific project is not represented by a publicly traded security, we typically cannot estimate a project’s beta directly. One process that can be used is based on the equity beta of a publicly traded firm that is engaged in a business similar to, and with risk similar to, the project under consideration. This is referred to as the pure-play method because we begin with the beta of a company or group of companies that are purely engaged in a business similar to that of the project and are therefore comparable to the project. Thus, using the beta of a conglomerate that is engaged in the same business as the project would be inappropriate because its beta depends on its many different lines of business

LOS 33.k: Describe the marginal cost of capital schedule, explain why it may be upward-sloping with respect to additional capital, and calculate and interpret its breakpoints.

Question 33.11: A company's schedule of the costs of debt and equity shows that an additional $3 million of debt can be issued at an after-tax cost of 3%, and additional equity of $9 million can be issued at a cost of 6%. The company plans to maintain a capital structure of 30% debt and 70% equity. At what level of new capital financing will the marginal cost of capital change with the issuance of new debt?
A) $3 million.
B) $10 million.
C) $13 million.
Explanation
B is correct. The break point at which new debt will increase the marginal cost of capital is calculated as $3 million (the level of debt when the cost will change) divided by the percent of debt in the capital structure (30%). Break point = $3 million / 0.3 = $10 million in total new capital.
Schweser note
Break points occur any time the cost of one of the components of the company’s WACC
changes. A break point is calculated as:
Break point = amount of capital at which the component's cost of capital changes/weight of the component in the structure